The 2021 season opened in Genk with enormous fields in the OK Junior and OK categories. All of today’s stars of karting showed their presence at the Belgian track, giving a glimpse of possible future champions of karting and beyond! It was a top-level event hosted at the track of Genk, located in the region of Limburg, Belgium. All the top teams and manufacturers were there to compete for the top spots, with the best talent in today’s karting. Despite the occasional threats from the cloudy skies, the rain never came but for a few drops, leaving a consistent dry track throughout the event. After the closely contested three days of racing, the checkered flag found the reigning World Champion Freddie Slater winner in OK Junior and the promising Rafael Camara in the OK category

Up, the compact platoon ready for the start of the OK Junior led by Freddie Slater (127) flanked by Alex Powell (26) after the exhausting qualifying heats to reduce the 90 entrants to 36 finalists. To the right, the OK Senior race podium with Rafael Camara on the highest step; he started from row two of the finals, but already took the lead on the first lap, kept it until the end of the 20 laps. He is joined by Joseph Turney, good at keeping in the wake of the leaders to then gain the place of honor on Tuukka Taponen
Pictures The RaceBox / LRN Photo / RGMMC – FG

The second edition of the Champions of the Future finally kicks off in Genk, after the uncertainty at the start of the competitive season due to the pandemic. The championship precedes the races of the Fia Karting European Championship to give the drivers and teams the opportunity to test their vehicles and the track, but which aspires to become a championship in itself by offering participants a unique and innovative format

In the 3 groups of the OK Junior, Julius Dinesen (KSM Racing Team) surprised being the first to top the timesheets ahead of Alex Powell (KR Motorsport) and Harley Keeble (Tony Kart Racing Team). Matteo De Palo (KR Motorsport) topped the second group ahead of William Macintyre (BirelArt Racing) and Kean Nakamura Berta (Forza Racing) but didn’t manage to improve on the first group’s leader, slotting just behind in third, sixth and ninth respectively. Kiano Blum (TB Racing Team) in the third group impressed with a blistering lap time for pole ahead of Lucas Fluxa (Kidix SRL) and Sonny Smith (Forza Racing) while improving the overall time by 4 hundredths of a second and getting the overall pole position.Macintyre, De palo, Keeble, Smith, Fluxa, Al Dhaheri (Parolin Motorsport), Blum, Nakamura-Berta and Dinesen all scored victories in the highly-contested qualifying heats, showing already the amount of potential winners in the category. Smith finished on top with the pole position for the pre-final, ahead of Dinesen and Blum.

Sunday was a change of scenery, even more for the Juniors, with a great comeback from Slater making up 8 positions on the prefinal to get to the top, ahead of Powell and Blum The final was expected to see great battles between the front starting Powell and Slater, but the Junior World Champion Freddie Slater quickly took the lead and never looked back, while Keeble and Smith took the jump to close the top-3 beating Powell who was unable to compete for a podium place. 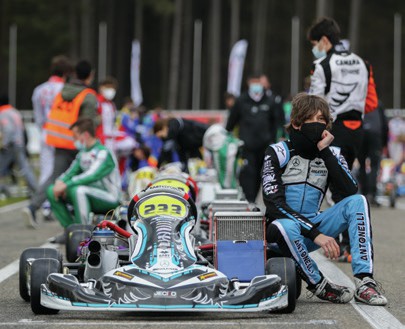 Andrea Kimi Antonelli (KR Motorsport) was definitely expected to be one of the top contenders and he didn’t disappoint! He was the first to put his name on top of the list ahead of Luigi Coluccio (Kosmic Racing Team) and Tymoteusz Kucharczyk (BirelArt Racing) but was quickly beaten for the pole by Arvid Lindblad (KR Motorsport), fastest in the second group. Nikola Tsolov (DPK Racing) slotted in between Antonelli and Coluccio in fourth and Rafael Camara (KR Motorsport) just behind in fifth. Arvid Lindblad was almost unstoppable winning all but one heat where he came second, with a similarly strong Andrea Kimi Antonelli behind him with a third-place finish, while Rafael Camara slotted in third just behind them at the end of the qualifying heats.

Sunday’s pre-final saw a slight change in order, with Antonelli on the top spot, but Joe Turney (Tony Kart) making a good jump to second and Rafael Camara completing the top-3, seeing the dominant so far Lindblad drop to fourth for the start of the final. The final race was quickly decided as soon as Rafael Camara put the speed he had shown all weekend to good use, jumping to the lead and pulling away early

James Geidel, President of RGMMC, is extremely positive about the upcoming season, especially the increasing interest from many teams and drivers to be back on track racing. “I’m pleased to see how the year has begun, it’s a positive start for karting in general and we’re looking forward to an exciting series, while always working to improve. The ‘Champions’ provides that next middle step to bridge the gap that exists, more-so for the teams, coming from monomake series’. It’s very different!Champions of the Future, in time, needs to become a standalone championship, but for now it’s definitely seen as a preparation ground for the FIA events.” 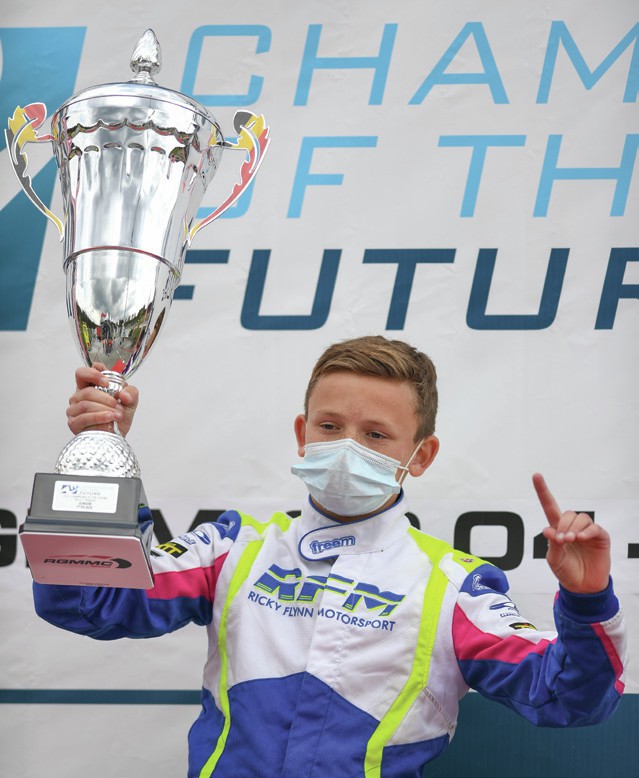 Reigning World Champion Freddie Slater of OK Junior succeeds in winning the first race of the Champions of the Future out of 90 registered drivers, the best at the international level, thanks to the dedication he had in preparing himself both physically and mentally and, above all, thanks to the hard professional work of his Team.

1) After qualifying, your best time was 54.212 which was quicker than qualifying; what happened?

Due to a short qualifying run, I didn’t get a chance to show my true speed and we hit traffic at various points.

2) In the pre-final you started from ninth position and after only nine laps you took the lead; how did you do it?

I had a great start from the inside and I knew I had to make progress quickly in the race before the race spread out. Luckily we had the pace to recover.

3) In the final you were in the lead for all 18 laps with great determination, an amazing victory. What do you owe this great start to the competitive season?

We have worked hard on physical and mental training at the start of this season. Along with hard work from the team, the combination is getting the best results.

4) Do you have a strategy to use for the upcoming Champions of the Future events in 2021, to win this ambitious title?

As I’m becoming a more mature driver I know consistency is key.

Driving every lap the same is important. I try to race with speed and minimal risk to ensure winning championships.

The group of the OK Senior in formation for the start with Andrea Kimi Antonelli (233) in pole position flanked by Arvid Lindbland (232), Rafael Camara (228), Luigi Coluccio (211) and Joseph Turney (247)

on in the race, never looking back until the checkered flag. Behind him there was a long battle between the defending Turney and his team-mate Tuukka Taponen (Tony Kart) how made a great comeback and managed to overtake at the closing stages to take second spot. The two KR team-mates who had dominated up until then, Antonelli and Lindblad, dropped a few places back and finished fourth and fifth.

Trophies in each class for the first 3 finishing Drivers in the final in eachevent.

DRIVER OF THE YEAR 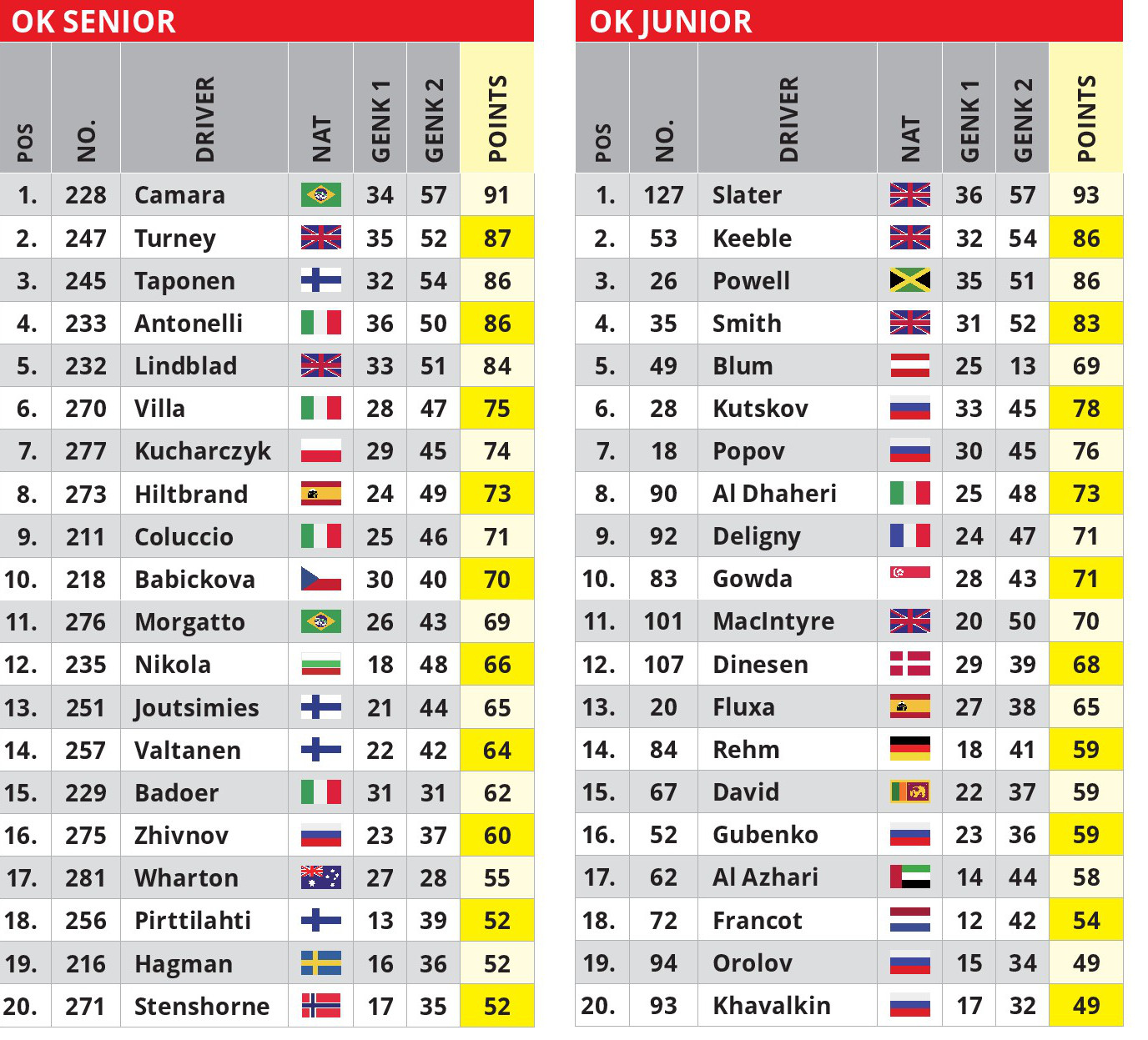