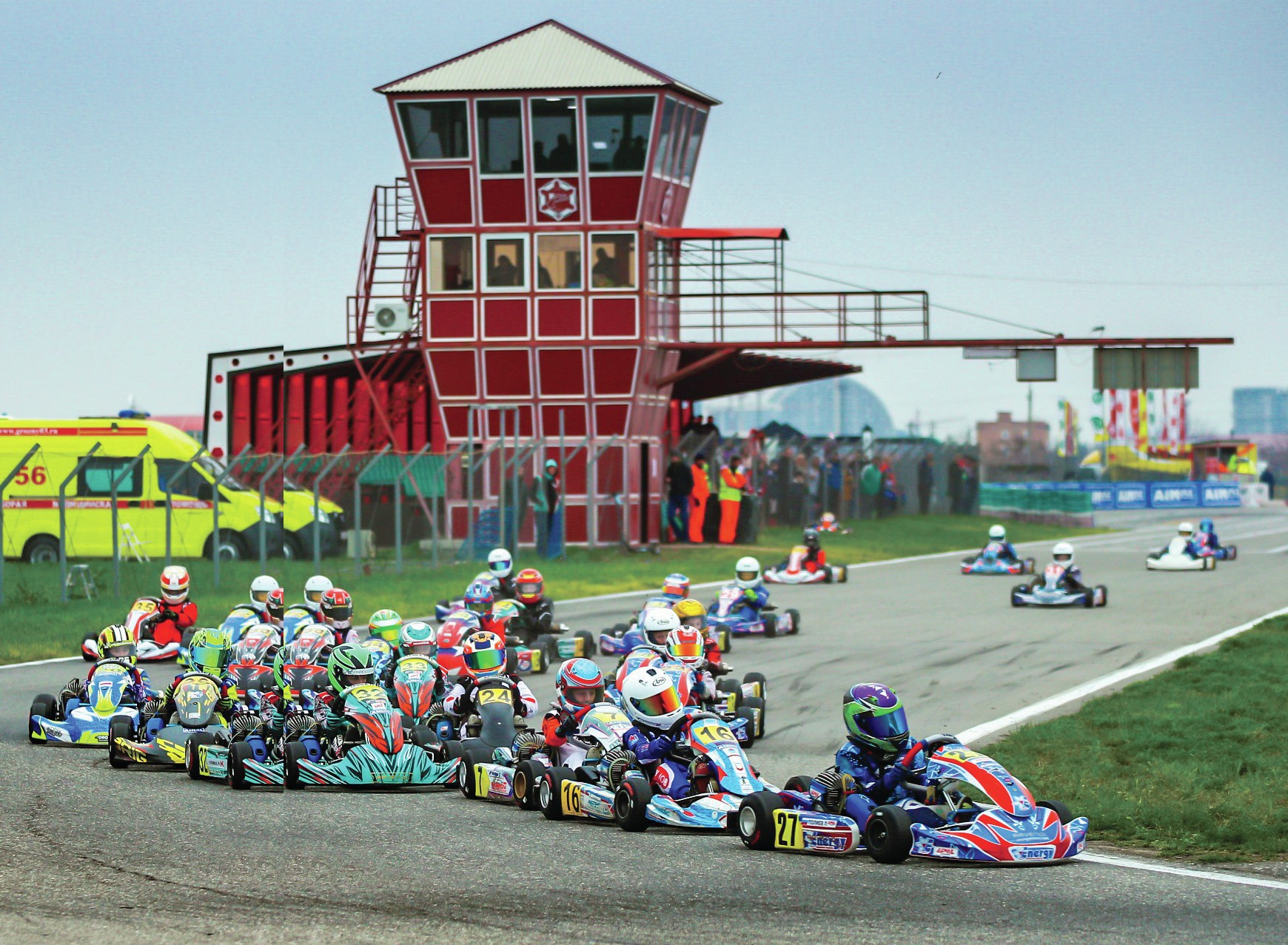 “Fortress Groznaya” – that impressive name of the Chechen Autodrom immediately attracts attention. Once upon a time there was an oil refinery on this place of the Sheikh-Mansurovsky district of Groznyi. And now – here are 60 hectares of motorsport activities for organizing international competitions. There are different tracks for road circuit racing, autocross, jeep trial, drift and drag-racing, as well as various motorcycle disciplines. But let’s talk about karting track. It’s rather difficult and interesting track with a total length of 1314 meters. Last year it was planned to hold the st stage of the Russian Championship here, but pandemic hysteria confused all the cards, and we can come only this year. And it was quite interesting and a little bit confusing because Chechnya – is a muslim republic with certain restrictions in dress and behavior. But in the whole we spent this weekend in a warm and friendly atmosphere

Groznyi met us with a bright sun and truly summer weather. However, by the weekend it got colder. But for karting drivers that’s no matter – just to ride round by round to accelerate and to improve their piloting skills. Almost a hundred athletes from various regions of Russia came here to take part in the main start of the season. The situation with COVID-19 is quite good here now so it’s not even necessary to wear masks.So, we could even finally hold a grand opening of the competition with a flag rising ceremony and speeches by the local administration representative and the RAF leaders. In general, it was a real sports event, which we managed to miss during the period of pandemic restrictions. The youngest pilots – the Micro class of the RAF Academy – did not come to Chechnya. They will hold their first trainings in Rostov-on-Don in early May, where they will take a theoretical course, pass an exam and receive their first racing licenses. So, there were only 5 classes in Groznyi: Mini, Super Mini, OK Junior, OK and KZ-2.

In the 60cc Mini class, the fastest was the pilot from Moscow, Daniil Kutskov – the young brother of Kirill Kutskov, who is currently defending the colors of the Russian flag at the WSK series races. Daniil took pole position, won all the qualifying heats and the first final but lost the second final to his closest rival and teammate, Mark Pilipenko from Vladivostok. Their team duel was lasting through the whole weekend. So, they made up the winning double. Kutskov is the first, Pilipenko is the second. Only Sebastian Kozyaev, a racer from the city of Serov, Sverdlovsk region, tried to impose a fight on them, but in the end he was content with bronze cup. In the older Super Mini, the qualification was unexpectedly won by Artemy Melnikov from Moscow.However, the qualifying heats had already shown that Melnikov took pole position not by chance. His skillful piloting in the head of the peloton made the leaders look differently at an unexpected rival. But his racing experience is not great right now, so he made not fully prepared attack and left the race. He lost such important points in the first final and it did not allow Melnikov to participate in the division of race trophies. The racer from Korenovsk, Leonid Poliev, is much more experienced pilot, felt very confident on the Chechen track and won the qualifying heats and both finals, winning the gold cup of the competition. Two pilots from different cities were fighting for the silver cup – Efim Derunov from Vladivostok and Ilya Berezkin from Gus-Khrustalnyi. They rotated among themselves more than once. And finally Derunov won this duel. However, Berezkin’s bronze and Derunov’s silver are separated by only one point. And, considering that there are still 6 stages ahead, we can confidently assume that the season will be hot! 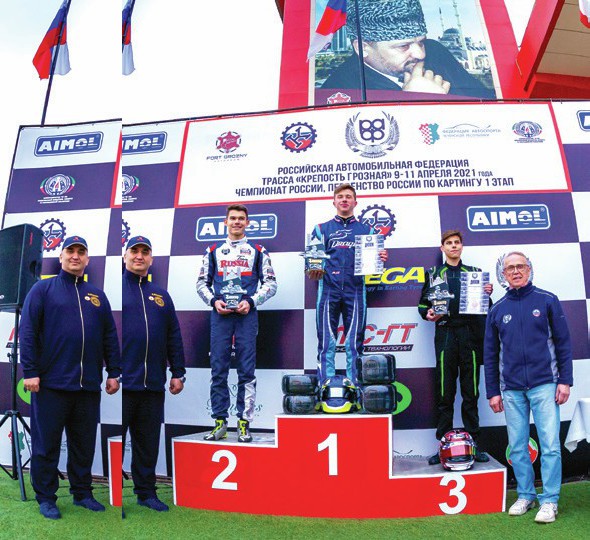 In the OK Junior class, everything seemed to be clear from the very beginning. The pilot from Ekaterinburg, German Foteev, was the fastest in each training. He took pole, won qualifying heats, started from the first line in the finals and finished by a wide margin. But! Even leaders are punished sometimes. A 5-second penalty for violating the starting procedure in the second final threw Foteev to the fifth place. The winner was unexpectedly Alexander Plotnikov from Novosibirsk. German Foteev with his numerous additional points is the third. And only one point was not enough for him to be the second!The silver cup was taken to Moscow by Maxim Orlov.

OK class is not quite popular among pilots this season. Or perhaps someone decided not to go to Chechnya? Who knows? But only 8 pilots entered the stage 1. However, the struggle was not joking. Each of them was determined to fight and wanted to win. But the winner is always only the one. And this is Grigory Primak from Toghliatti. Not everything worked out for him during this race, but after qualifying heats he managed to improve and started from the second row of the grid. It was a confident victory and here they were – the gold cup and the highest step of the podium. But it could be called the racer from Perm, Nikolai Violentyi a real hero of the race. After an unsuccessful performance in the qualifying heats Violentyi started in the final from the penultimate position, however, he pushed with best laps time and finally reached to the second place. The third was another Perm pilot, pole holder, Vladimir Verkholantsev.

In the KZ-2 class there are never problems with a quorum. That is why it is so interesting to watch their bright starts. The red traffic lights go out, and the long peloton instantly explodes, crumbling into pockets of struggle

and confrontation literally on all floors. The pilot from Bryansk, Nikita Artamonov, approached the beginning of the season in very good shape. He took the pole, then it was a convincing victory in the qualifying heats, despite that Alexei Smorodinov from Kursk won one heat. Then he was the winner of the 1st final with the best lap time. But after all the wheels ran out. It’s always an important choice to push or to save the wheels. Artamonov did not save. Maxim Turiev, the racer from Nizhniy Novgorod, rushed past with a bullet and finished first. Artamonov was only the fifth. But one point was not enough for Turiev to win – the gold cup was still for Artamonov. Turiev was the second. The third was Yaroslav Shevyrtalov from Krasnodar. 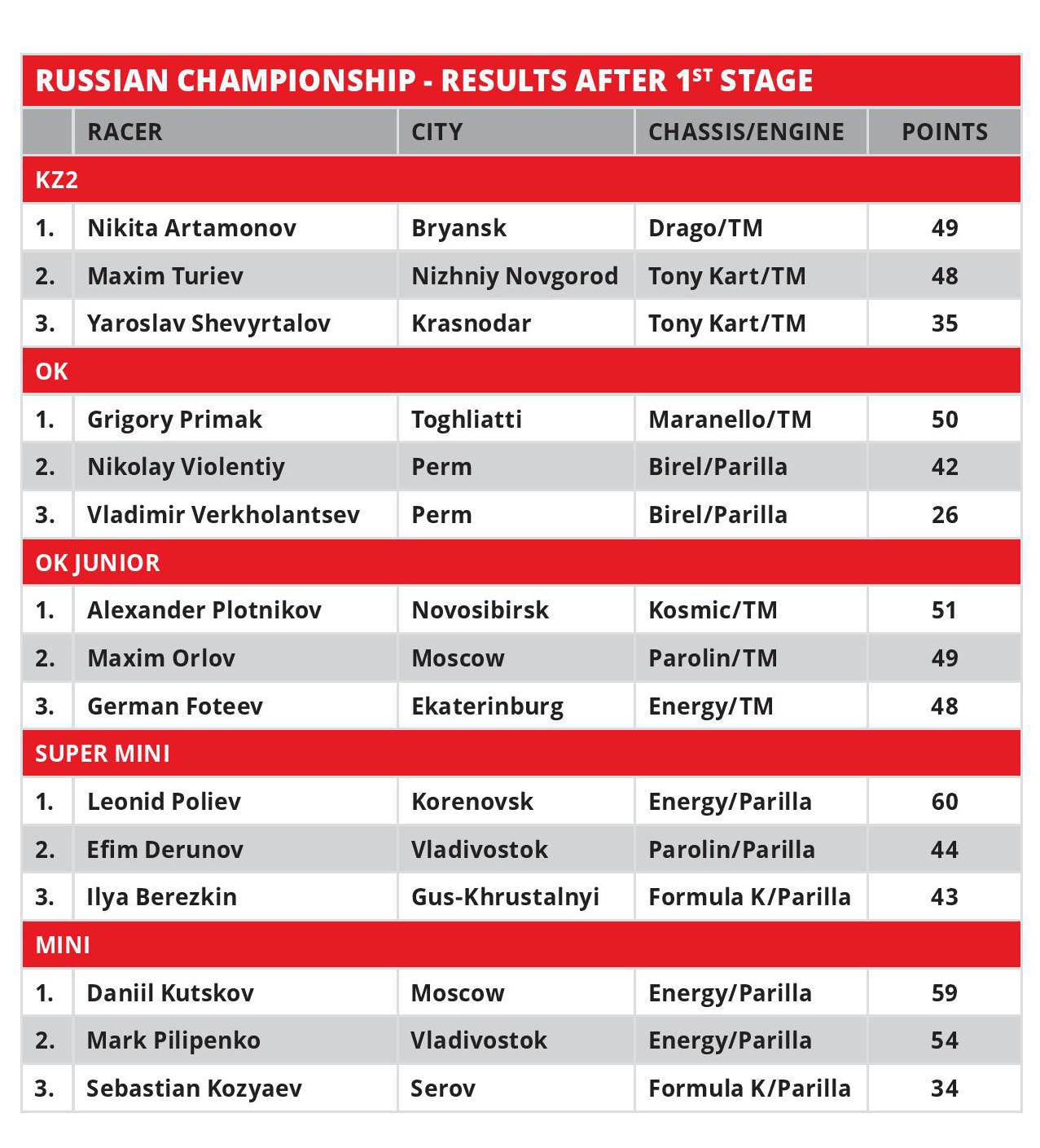 Now there is time to have a rest a little bit, rethink the experience gained, work through the mistakes made and prepare for the new stage of the Russian Karting Championship, which will take place on May 14-16 in Rostovon-Don at the Lemar karting track.