SIMPLICITY IS THE THRUSTER OF KARTING

SIMPLICITY IS THE THRUSTER OF KARTING

For karting to become widespread again, we need to return to certain original concepts, such as simplicity. Which from an engine point of view indicates the always valid air-cooled engine 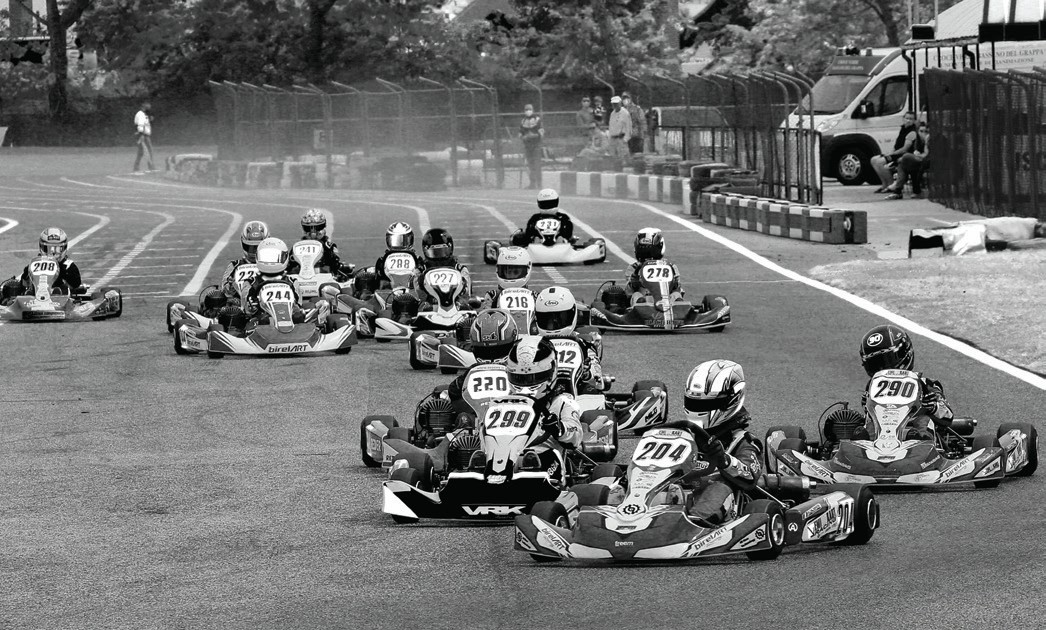 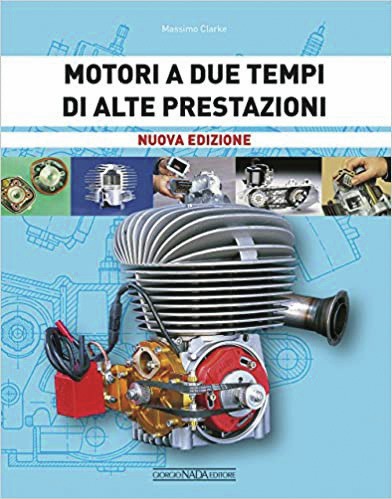 It’s no coincidence that an air-cooled kart engine is represented on the cover of a fundamental book for 2-strokers, such as “High Performance Two-stroke Engines” by Massimo Clarke

In this feature column, we have often underlined how one of the “conditio sine qua non” of returning to an adequate expansion of basic karting, namely the most popular kind, grassroots, is to take up some of the original concepts of this type of vehicle. Starting from simplicity: an aspect that alone drags many others along with it, all positive. To begin with, a simpler kart is also lighter and thus has greater performance; or it allows even the heaviest drivers to race competitively, with the same minimum regulatory weight. Another aspect often not considered as much as it deserves to be is that a lighter kart affects the tires less, stresses them to a lesser extent, so they maintain their performance longer and last longer with the same other characteristics, with related economic advantages. The latter, moreover, are increased with constructive simplicity for the simple fact that what is not there… does not cost! Finally,there is the far from secondary factor that a  simple kart is easier to manage and therefore can bring many simple enthusiasts to the track, and not just engineering students or those who can afford a specialized mechanic.

AIR-COOLED KART  ENGINES OFFER GREAT   EASE OF USE, WHILE   CURRENT WATER-  COOLING SYSTEMS ARE   EXTREMELY BOTCHED  AND MOREOVER I NEFFICIENT

THE BEAUTY OF AIR

In the past, we have analyzed how the most successful and accomplished categories are those that offer engines that are simple to use and easy to manage, not those with the most power ever. The latter are fine for the top categories, the Cik/ Fia championship ones. It is right to point out, in fact, that when “world-championships-level” engines were proposed, they did not trickle “down”: this is what happened for example with KFs and OKs. While when engines suitable for the large body of kart drivers were imposed, such as the 125 with fixed gearboxes, decompressed and with a standard carburetor, these were so widespread that they also had an impact on the KZ World Championship. Given therefore that the engines must have characteristics of simplicity, at this moment we shall focus on a feature that is the basis for this aspect: air cooling. Someone will probably turn up their noses, but in our opinion, in the specific case of karting, air cooling still has a more than valid reason for existence, starting precisely from the general simplicity it guarantees. Furthermore, if it is true that in theory liquid cooling guarantees better working conditions for the engine and is also more technological, in truth we do not know how much this reasoning is really applicable to kart engines. Anyone who does not have blinders on can indeed observe how in kart engines (with the sole exception of the Rotax Max) the arrangement of the water-cooling system is completely botched: huge radiators compared to the displacement (indication, thus, of extremely low efficiency), hydraulic circuits with 7 pieces of pipe (and 14 clamps to be tightened…), the need to adjust the curtain on the radiator by hand, and so on. The fact that only in karting has it not been possible to create liquid cooling systems that are truly self-regulating in temperature and that have only two pipes (one forward and one return) between the engine and the radiator, should make us think (bad).

Some would have us believe that using air cooling on a kart engine is something that diminishes its technical prestige, but we hardly agree. Apart from the fact that if even today many kart categories still use this type of engine, there must be a reason, and we also have a quite significant example: the book “High performance two-stroke engines” written by Massimo Clarke. In this small “bible” for fans of the subject, in fact, air-cooled kart engines are represented as the maximum evolution of this type. So much so that one of these engines is even put on the cover: of course, in this case, the presence of the rotating disc valve placed at the front counts above all, but it seems clear to us that obviously, the presence of cooling fins did not represent a negative. In any case, anyone who has been hanging out in the field of engines for a while knows very well that only when the outdoor or air temperatures are truly high can there be some limits in air cooling, towards the end of the race. However, nothing unsolvable or deleterious: just remember the old practice of closing the inlet with your hand every now and then to increase the fuel in the engine, with a cooling and lubricant effect. And the writer himself knows it well, having in Italy found himself running a couple of times on days with temperatures over 40° C. Also, allow me, if they want to make us believe that air cooling gives problems, it really means that they are deliberately closing their eyes to the many other problems that water-cooled engines instead give, including belts, water leaks, temperatures that skyrocket if you don’t pay attention to the instruments on the steering wheel, and so on. Not to mention the cost. 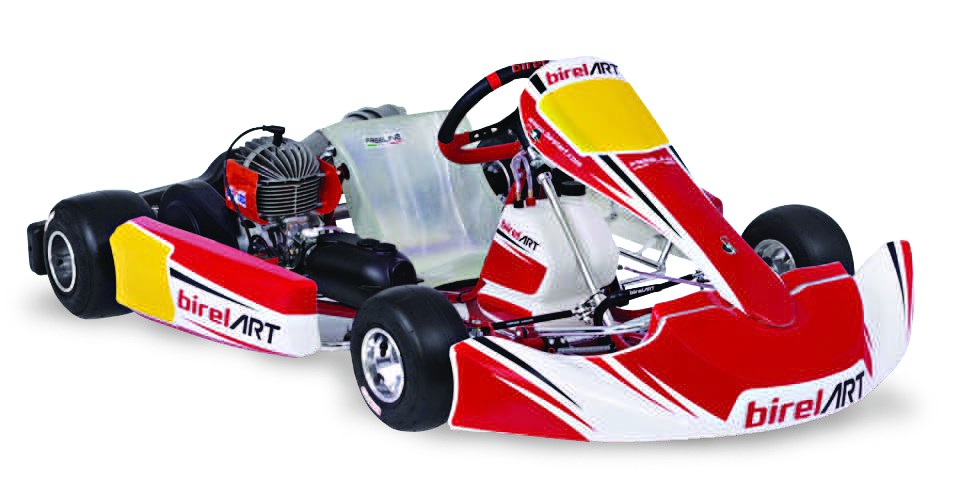 Many of the most popular categories, such as Easykart (but it is not the only one), still adopt air-cooled engines. On the right, an example of the range of engines produced by PRD, which also offers very simple and very economical aircooled models, with or without clutch and electric start

Having laid the foundations to make it understood that an air-cooled engine is still suitable for karts, let’s see what the real situation is. Without considering the Minikart engines but only the more “adult” ones, we can easily see that there are still categories that adopt the air-cooled engines with success and without particular problems related to cooling: one above all (but not the only one) is the Easykart. Without forgetting that there are local situations that see significant categories run by engines of this kind, such as TKM in the UK or Raket in Scandinavia. In any case, the major European engine manufacturers still have air-cooled engine versions in their catalog that may be adopted by particular series around the world, which due to their economical characteristics have a certain success, albeit limited to specific areas. From this point of view, the real problem is that the international sports authority does not foresee “sedated” categories with this kind of engine. Which, if they did not make sense would not be produced anymore, right? Instead… An example that we would like to highlight is the Australian manufacturer PRD, which in its engine production has a wide range of 100 and 125 singlespeeds, both liquid- and air-cooled. A series that can be modulated in many ways, for the different construction alternatives: piston port or reed valve intake, direct drive or with centrifugal clutch, electric  start or not… there are so many choices. What we would like to highlight, however, is that the prices at the Austrian importer are really embarrassing (for others): they range from less than 1,000 euros (carburetor and muffler included) for the simplest engine, the 100/125 piston port with direct drive from 17/21 hp, to less than 2,000 euros for the air-cooled reed-valve variant with electric starter and centrifugal clutch, with about 23 hp. HPs moreover adequate for that category of which we often talk that for economy and performance (and fun) should be placed halfway between rental/ endurance and current racing. 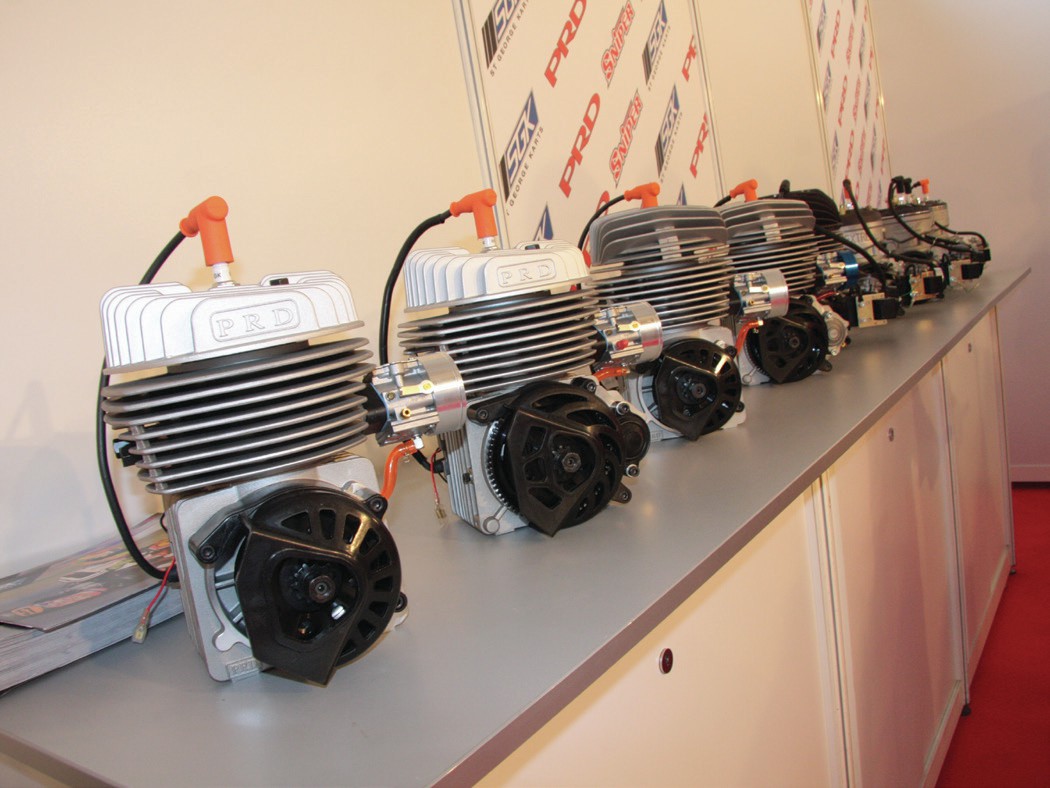 MANY ENGINE MANUFACTURERS STILL  HAVE, IN THEIR CATALOG,   AIR-COOLED UNITS  THAT EQUIP VARIOUS   CATEGORIES AROUND THE WORLD

WHAT MORE CAN BE DONE

Briefly, in our opinion, there is indeed space for one or more kart categories recognized by the Cik/Fia with air-cooled engines and set up so as to foster the popularity of this sport across the globe. We’d also like to also add that re-thinking karting in this sense could unlock or unleash certain mentalities and lead to further benefits from a technical point of view. For example, we can think of an engine with “encapsulated” fins, that is with side conveyors (but also on the head) which by channeling the air improves cooling and reduces noise. If we then think that a direct drive engine is simple but also anachronistic (after all, we too believe that the “100-style” starter is no longer adequate, in the third millennium) we still invite the powers-that-be to pick their brains and find an alternative system to electric starting (always too complex and problematic) since the push-type does not represent a problem with KZ. In addition to decompressors such as those used in OK, which do not work to perfection but only because they are badly sized, new centrifugal clutch solutions can be studied that make karts easier to manage and modern at the same time. What comes to mind, for example, is a clutch that still allows push-starting. It is not impossible: it was present, for example, on the Honda Super Cubs (the bestselling two-wheeled vehicle ever) thanks to a one-way joint that allowed push- starting in case of problems despite the presence of the automatic clutch. Or you could transform the classic singlespeed centrifugal clutch so that it can be manually operated when needed, that is to say for starting, in the event of a spin or even just to move more easily in the paddock. The possibilities are there: all it takes is some thinking about. And maybe it would be better for someone to do it now before the Chinese think about it… or not? This is also an aspect to reflect upon. 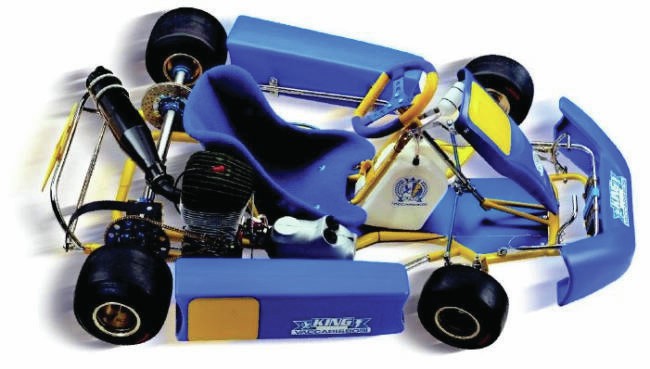 a typical kart from the early 90s: the constructive simplicity is evident. Below, a Raket 120ES, which bringing the Minikart philosophy to 120cc (and 14hp) offers economical fun and pushes an appreciated category in Finland

ADOPTING “STATE OF THE ART” AIR-COOLED ENGINES ALSO SERVES TO RE-THINK KARTING, RESULTING IN FURTHER ADVANTAGES IN MANY OTHER ASPECTS